Have you seen Clive?

Have you seen Clive?

The students and staff of St Mary’s National School were delighted and thrilled to be visited by our very own Elf!  He joined us mid way through December to keep an eye on things in the school but we were busy trying to keep an eye on him! We thought that the first thing we ought to was to give him a name, so after taking suggestions from everyone we put the names in a box but we weren’t quick enough ‘Clive’ got their first and chose his own name!! Clever elf!! As Clive seemed to get very busy at night time we had to set up an Elf Patrol to locate Clive every morning, sometimes the Elf Patrol had to do a couple of laps of the school before they managed to locate him. One morning we found him perched in the office, another morning we found him hiding in the kitchen eating a chocolate biscuit and having a cup of milk! After another busy night we discovered him in Mrs Roe’s room playing Elf Twister with some toys!! On another occasion we found him in the office sending a report to Santa! One Elf Patrol couldn’t believe their eyes when they discovered Clive in the storeroom having made a ‘Shoe, Shoe Train’ with everyone’s indoor shoes! However, the most surprising stunt Clive got up to was on our morning of the holidays, what had Clive done… only cover the School screen in the hall with wrapping paper and a very nice job he did wrapping it too! And lo and behold what was behind the wrapping paper when we opened it but a picture of Clive…making a snow angel in flour. Where he found the flour we don’t know! 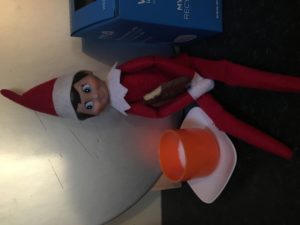 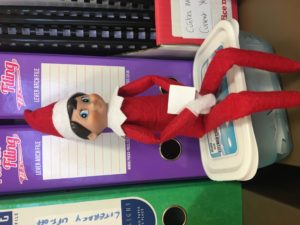 View all posts by Ms Russell