In November, our school began preparations for the 2017/18 Christmas play. It was called ‘Baubles’. It was about a mysterious new bauble appearing on a schools Christmas tree every morning. The baubles gradually told the story of Christmas. A boy called Archie who attended the school was determined to find out who was making the beautiful baubles.

Everybody in the school had a part in the play, from junior infants up to sixth class. We all enjoyed preparing for the play, learning our lines and, especially, the dressed rehearsals. “My part in the Christmas play was a king. I really enjoyed it because we all got fair parts which fitted in with our personality and we got asked if we wanted a singing solo and if you did the teachers tried their best to get you one,” says Olivia Hartigan-Hogan, third class.

On the day everybody was nervous and excited for the play. “I was nervous but excited,” says Amy Cooke, third class, “I was Mary in the play and my favourite part was when Joseph (Adam Griffin), the donkey (Sam Patton) and I, Mary, had to walk up and down the church and sing our song.”

The play was a great success and everybody had great fun, “It was great and everyone did a great job!” says Scarlett Davern, sixth class, who played Angel Gabriel. 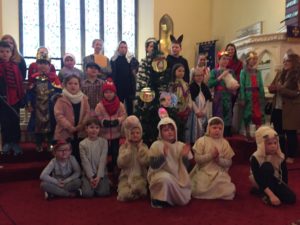