Spike ball is a bit like volleyball but has different rules. Three Transition Year girls came up every Wednesday from Our Lady’s to train us. It was quite hard at first and we thought we were not very good at it.

There were 4 schools at the blitz. We were better at it than we thought because the other teams were good and we were able to keep a match going for a while. We played loads of matches there and we won a few of then. The boys’ school was meant to be the best there but both of our teams bet one of their teams.

If I was in the school next year, I would definitely play Spikeball and I hope that in Our Lady’s I’ll get a chance to play it as well. 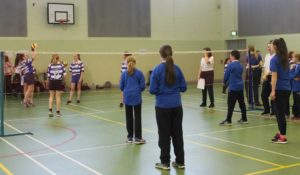